We’re pretty spoilt for zoology teaching resources at Trinity College Dublin. That’s because we have a quite complete teaching collection in our zoology museum. A superfluous resource for universities in modern times or a relict of imperialism? That’s not important now. What’s important is that our collection is in integral part of our teaching program and provides students with a hands-on opportunity to see representative specimens from across the tree of life.

As off-campus learning is likely to be implemented in the upcoming academic year, our students won’t have access to our museum specimens and we have to find an alternative to hands-on material to teach our zoology practicals. 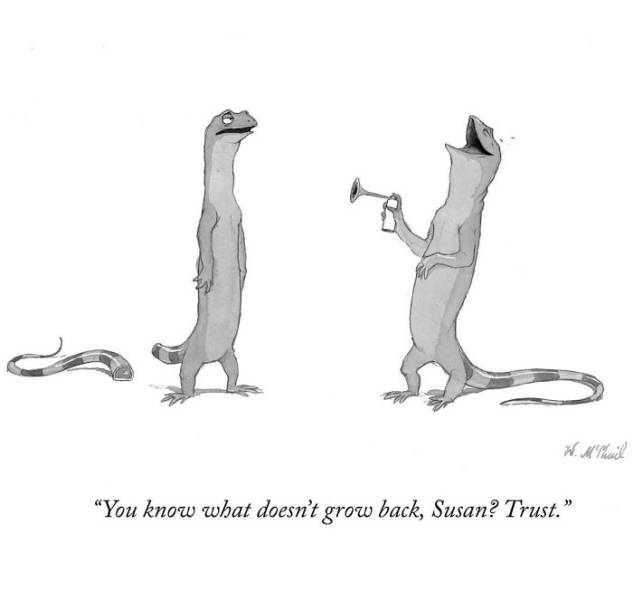 Cartoon by Will McPhail, New Yorker

Fortunately, the pandemic has renewed the importance of material for distance learning.

Here’s a list of online resources that students can access from home. By no means do they replace hands-on material, but they can supplement zoology teaching now and into the future and are better than nothing. I’ll be updating this list as I find more links and I’d like to hear from you if you’ve found a good resource.

Encyclopedia of life… and other databases

EOL is a database of life. It has entries and photographs for lots of species. Similar databases are Atlas of Living Australia, GBIF, National Biodiversity Data Centre (Ireland) and Explore Your Shore (Ireland). They have occurrence records, photos or identification resources.

3D models of fossil animals by the Museum of Natural History, University of Oxford. You can view them, download them or print them if you have a 3D printer.

Lots of scientists are on twitter and they have been sharing photographs or videos of morphological or anatomical adaptations of animals. Here are some accounts to follow:

@PaoloViscardi – Dr Paolo Viscardi is the Zoology Curator of the National Museum of Ireland.

@JackDAshby – Dr Jack Ashby is the manager of the Cambridge University Zoology Museum
Here are some examples:

See this collection by Daniel Paluh (@danpaluh on Twitter) that’s part of the OVert: Open Exploration of Vertebrate Diversity in 3D and available on Morphosource

Or get your students to make their own skeletons!

My students are INCREDIBLE!!!! Before we suspended in-person classes, I told them that if they skeletonized a fish of their choosing, I would give them extra credit, and the photos have been pouring in! I'm so proud. Can you guess the fish? pic.twitter.com/MMBhPTxgAA

Who can say no to ants?

Several museums have digitized (or are in the process of digitizing) their collection. Here are some of them:
Museum Victoria (Australia)
Natural History Museum (UK), NHM images, NHM Data portal
Australian National Insect Collection has a number of identification resources and collections online
Haswell Museum, (the University of Sydney Zoology Museum, Australia) has photographs of specimens and virtual slides
Or take a virtual tour of the Smithsonian National Museum of Natural History
And iDigiBio has a few resources of undergrads
The Grant Museum (UCL, UK) has an online handbook of Chordates (Vertebrates)
I liked the educational resources of the Florida Museum. Their fish stuff covers a lot of the same material we do in lectures and includes a shark dissection!

Instead of bringing specimens to students, why not bring students to specimens? Get them to record local biodiversity, try out their identification skills and upload them to iNaturalist.

Lots of scientists or societies have blogs that are written for a general audience that would be accessible to undergraduates and are meant to be more engaging than reading research papers. Some of them are about a topic of interest, other are about a recently published paper. For example, the plain summaries of the BES journals. Here are some examples of blogs about zoology topics:
Dr Paolo Viscardi’s blog has lots of information about identifying skulls (see the Twitter section). Here’s an example.
The evolution of vertebrate intercostal breathing (Phys.org)
How seals dive (The Conversation)
The evolution of the spine (Science Magazine press release)
Ecology is not a dirty word. Dr Manu Saunders writes thought-provoking blogs about a range of topics in ecology.

How about some Shiny apps?

Simulating hybrid zones with assortative mating. Made by Dr Ethan Linck (@ethanblinck) based on a paper by Dr Darren Irwin

Or a mobile AR app?

Dr Christian Damsgaard made a free AR app available on the apple store based on their review about air breathing fishes.

And now for something different…

A video of Jensen’s inequality by Dr Joey Bernhardt (@JoeyBernhardt)

A book on population and quantitative genetics by Dr Graham Coop

A flowchart of molecular ecology from the Molecular Ecologist blog